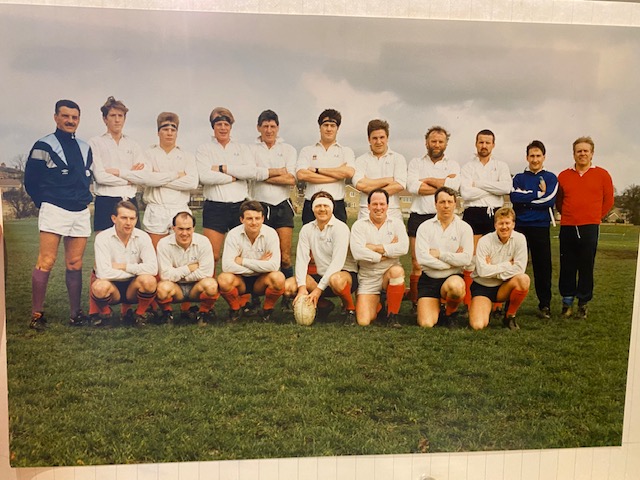 Will is second from the left at the back; Richard is centre front, holding the ball

When Will turned 17 I suggested to him that the best way to make the transition from schoolboy to senior rugby was to play in it, as I had done all those years before. So we put my theory to the test with an outing for Preston Grasshoppers 4th XV at Vale of Lune. Will was intrigued by the warm-up, which consisted of a schooner of sherry from the communal bottle of Bristol Cream. My explanation for this was that it was low in bulk, highly calorific and slightly stimulant. Will was more at ease, though, with the pint of ale in the post-match bath.

The portly Vale fly-half was licking his lips at the prospect of such a skinny, youthful opponent and, sure enough, within a couple of minutes, he lined Will up for a late flattener. He was standing proudly over his victim when I strolled over and proffered him a left hook, followed by a right uppercut – and there was no further trouble. The young referee was also being a bit of a pain, but he agreed with me that he should abandon his quest to exploit every last one of the most obscure laws in the Handbook, so that we could get on with the game.

We had another game together at Davenport (now Stockport), where Will kicked his goals, distributed smartly and made his breaks, playing with as good an old head on his shoulders as any of the grizzled veterans on display that day.

Shortly thereafter I was asked if I would captain the Anti-Assassins at Calder Vale. Oh, and by the way would it be OK if Will were asked to play as well. Wow! What an opportunity to join a very short list of father and son team-mates at the exalted Anti-Assassin level. Even better, Calder Vale was almost a second home for me in those days. I had presented the prizes on Awards Night, I had spoken at the Club Dinner and I had taken the Shireburn Gentlemen there for a couple of Sunday fund-raisers. I knew I was in for a warm welcome, both on and off the pitch and I briefed Will accordingly. It ran along the lines of, “Sam Boyle will buy you a pint afterwards, but he will spend 80 minutes seeking to dismember you one limb at a time.”

Will duly stood a fraction deeper and profited from Mickey Weir’s exemplary service to spend the entire game comfortably out of Sam’s reach. I also told Will that under no circumstances was he to deploy his favourite chip over the top and re-gather tactic, especially in and around his own 22. It worked a treat at Sedbergh, but it would be a recipe for disaster at this level. The game progressed, when, almost under his own posts, Will fielded a rather untidy rolling ball and, to my horror, he looked up, chipped the onrushing pack of Calder Vale assassins, caught the ball on the full, ran 10 yards, slipped the ball to one of our flyers, who was tackled into touch, just short of the try-line.

Will and I crossed on my way to the line-out and the cheeky bugger asked me, “Dad, what was that you were telling me about the chip and gather?”

Talking of line-outs, our signals involved combinations of straight and curly capital letters. For example, S, curly, H, straight and D, a combination of both, so Q and P together indicated a short throw in. Thus, “Quantum Physics” would get all our nuclear scientists in the front row very excited. David Leslie, the distinguished international referee, was on duty that day and he was not renowned for his sense of humour. I was particularly irritated by a series of overly pedantic decisions when he caught my eye as I ran towards a line-out. I called the throw in with, “Duff Decision,” cue mirth all round. To his credit, David couldn’t help but laugh!

He wasn’t laughing a few minutes later when I was defending on our wide left as the quick little Vale scrum half flew down the wing. I over-committed. Well you would wouldn’t you aged 48, and he stepped inside me off his right foot. Old habits (especially bad ones) die hard and I automatically brought up my right arm in a stiff-arm tackle – the classic coat-hanger. It caught him flush on the chin, which stopped abruptly, whilst the rest of his body carried on and ended up in a crumpled heap at my feet.

Now, in any normal circumstances, it was a red card, indeed, nowadays I might have been banned ‘sine die'. As I picked the lad up I was mortified with shame and, apologising profusely, I saw an extremely stern-faced David Leslie approaching. I started to explain that it was a reflex action... but I tailed off in embarrassment.

“I’ll give you a signal,” he said, “Absolutely outrageous! Now go away and behave yourself.” What a great referee!

For all of us of a certain age and of a northern inclination, the Anti-Assassins set the gold standard for representative rugby in the north-west of England. I first played for them in the mid-1960s when I was in my early twenties and I finished 25 years later playing with my son at the age of 48. Throughout all of those years, and since, we all benefited from the inspiration and the example set by Stuart Faulds, Ken Woolley, the Kenyons and all their companions of yesteryear.

What a wonderful legacy they have left us and I am immensely proud to have been a part of their story.

No comments have yet been added to this memory.

Add your own memory
View more memories about Representative matches